I am not particularly good at fantasy sports. I play, regularly. I’m even on the more competitive end of most groups that participate in the absurd practice of drafting players for an imaginary team and rooting for their stats to be enough for a “victory”. I SHOULD be good at fantasy sports. I’d guess that I have an above average knowledge of statistics, when compared to other sports-watching Americans. It occurred to me this year, while watching my fantasy football team sink to another middle of the pack finish, that I’m never going to be good at fantasy sports, as long as I maintain this idea that I’m the smartest person in the room. Despite the fact that I haven’t read, paid attention to strategy, or approached the preseason with any curiosity. As long as I think that I’m somehow getting a leg up on everyone else by picking the running back that they’re “not smart” enough to take, even though he has an injury history.

Something I have found myself to be particularly alright at is asking questions of people. For a portion of my life, as a job, sure. But for most of my life, simply as a potentially annoying friend, date, dinner companion, or moviegoer. It dawns on me more and more each day that this is one of the truest gifts my mother passed on to me. When I was a small boy, and we would go shopping, I’d grow fidgety in stores where she would be deeply involved in full on conversations with the kid bagging groceries, or the woman behind the pharmacy counter. Annoying as it can be, I think genuine, generous and careful curiosity is one of the best gifts that we can give to others, and it costs us nothing.

We exist in this weird, fantastic, accessible bubble of space, as poets. Sure, it isn’t always ideal, or safe. But what I most love about it is how reachable everyone is. We have that on a level that other artists, actors, musicians, and so on, may not. Look, I got into poetry like three years ago, not knowing a thing about what I was doing. I feel like, in that way, I am still as much that same dude watching youtube videos in my room late at night, as I am a writer who takes the craft seriously and has had the fortune of having (some) poems really appreciated in a lot of places. Make no mistake, though. While not purely and completely, a lot of this was a selfish project. So many of the people I had the joy of interviewing this month are heroes, to me. Legitimate heroes. I read this Michael Jackson biography once, and it talked about how young he was when he first got to walk around Hitsville, how in awe he was of all the Motown artists. In one room, there’s Diana Ross. In another, Smokey. Marvin. The Four Tops. And how that admiration drove him as an artist. So much of that is how I still navigate the poetry community, at large. With admiration as fuel to grow. I still find myself searching journals, or reaching out. Often, it’s like, “Well, what’s Megan working on? I gotta get on her pace.”, “Nate Marshall has a new essay/poem up? Gotta read it”, “Bill wants to come through Columbus again? Clear the schedule”, “Oz is…I mean, being Oz??? Can’t sleep on that.”

I also hoped to use this as a timeline (an uneven timeline, but a timeline nonetheless) of the moments and poets who shaped me as a creative. Who, even without them knowing it, gave me a push. Getting a copy of Jon Sands’ The New Clean in 2011. The first time I saw Marty McConnell in person. The time I introduced Rachel McKibbens to a stage at an open mic, having no idea who she was, but quickly finding out. The local poets who I very seriously count as mentors (Scott Woods, Will Evans, Ethan Rivera, Rachel Wiley), and the local poets who will soon be the names on many, many lips (Meg Freado, Ryan Javery). I really aimed to put a lens on these poets. To give them to the world, in a similar way they were given to me. Unexpected gifts in a time of need, really.

I really want to thank these artists I’m fortunate enough to both admire and, in many cases, call friends. I don’t know if we appreciate that part of it enough.

I appreciate these people for letting me invade their lives and take up a block of time during what is a busy month for almost all poets (because, of course, the world at large never demands more out of us than they do in April). Some of them were touring, or teaching, or powering through school. All of them had better things to do than indulge my desire to have the not-so-easy questions answered. I arrived to poetry through journalism. In some ways, even in my poems, I think that I am still a journalist. It was so long since I had a chance to take on something I truly loved. It reminded me to feel small. To not know what it is to have all of the answers, which I sorely need, at times.  I have so many more questions, so I hope to do this again, ideally when I’m not on the brink of a wedding. I am overwhelmed with gratitude, and endlessly inspired. Thank you all.

I will sincerely try to let my strengthened level of curiosity consume me once again when it’s time for fantasy football. I could stand to ask a few more questions there. 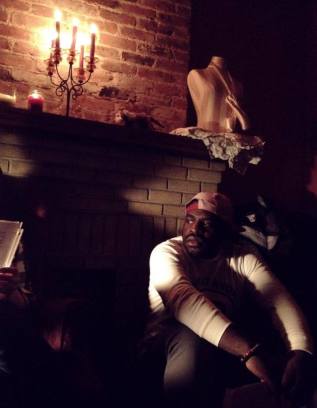 HANIF ABDURRAQIB is proudly from Columbus, Ohio. He writes poems when he’s not judging your record collection or eating red velvet cake. So, not as often as he should. His work has appeared, or is forthcoming in Freezeray, Joint, Muzzle, Vinyl, Radius, and other awesome places. His chapbook, Sons of Noah, is forthcoming in 2014. He sings in the shower, and encourages you to join him. Not during the Whitney songs, though. Those are all his.